On four acres of beautiful land on the edge of Hatfield and Northampton, the Pioneer Valley Workers Center has started a worker coop farm. The farm is owned by seven founding members with years of agricultural experience. Two of the founding members, Edwin Martinez and José Vazquez, as well Lead Organizer for the Pioneer Valley Workers Center, Gabriella della Croce, agreed to speak with the Common Share Food Co-op about their exciting new project.

The farm began just last year when an organization called All Farmers, which provides land access to immigrants and people of color and refugees, approached the Pioneer Valley Worker Center  and asked if they would be interested in cultivating a parcel of land on the edge of Hatfield and Northampton. Although the Workers Center originally wasn’t sure if anyone would be interested, they brought the question to their two Worker Committees and got an enthusiastic response. As Gabriella recalls, “People were very eager, and so we began meeting and exploring what it would look like for our members, many of whom work on farms, to grow their own food and have their own farm.”

When asked about the farm’s mission and what the co-op hoped to accomplish, Edwin’s answer was immediate: “I think it’s a very big vision.” He dreams that one day the work they do on the co-op farm will be “work that we could do not only on Sunday, but not to have to work so much on other people’s farms. The best would be that we would like to disappear that feeling of having a boss looking over your shoulder at every moment. We would like to be our own bosses, to not have that pressure to be like, ‘argh no the boss is coming he’s going to give me a hard time he’s going to scream at me.’” José explains, “We all have different ideas, but most of the people in the group are related – we’re all family, so we can think and talk together easily. We think that on the farm we could plant from here to there, and expand in the future. And we would like to be able to expand a lot and have a lot of different crops.”

Every month all of the co-op members gather to make decisions about “what to plant, what crops, and what things are [they are] going to need for planting,” but despite its big dreams, the co-op farm faces significant challenges. Edwin explains that “most [of us] honestly can only come here on Sundays because we work full time. […] This year we haven’t been able to get to everything, we still have an area we haven’t even planted, but in a year, we hope to be able to cultivate all of this.” He continues, “I think when one starts a co-op the first year it’s a little difficult to orient yourself to how this is going to work, what plans are we going to implement to keep the plants alive, how to get the insects off of them – it’s a lot of problems, and we’re facing these problems now.”

Beyond free time to work, some co-op members have also struggled to adjust to a new way of farming. Edwin explains some of these struggles, remarking, “What we’re learning is to have more experience cultivating this together. It’s all organic, there’s not a single chemical in anything, it’s been really challenging for me because in the farms where we work, where I work for example, it’s not organic. They have a lot of chemicals they use and it’s easier in a lot of ways to kill the insects, but we’re kind of trying to learn. I feel a little worried, but it’s the experience we’re gathering this first year.”

Edwin explains that having an organic farm is also a controversial issue for some farmers who are accustomed to growing in more conventional ways, but believes that despite the added difficulties “in reality I think it’s more healthy for the human body, we’re going to avoid sickness in the long run, and even the flavor of the vegetables is going to be better.” Although as of yet, no vegetables have been harvested or distributed and the co-op hasn’t yet settled on a marketing plan, they have lots of big ideas. They’ve gotten offers from local businesses to buy their products once they’re ready to harvest and they want to sell to restaurants as well as back to their own community and to PVWC’s Worker Committee members.

Gabriella also describes the broader vision for the farm to grow a lot more than just vegetables. She says that “This will be not only just a farm but a community space. So the idea is that in the future to have a farm that benefits not only these seven members but to have a community garden space where other members who don’t have enough time or energy to devote to being part of the co-op can also have access to land and grow food. We also want to host workshops here and events and community gatherings.” Edwin also sees the farm as a potential source of employment for community members – just one more way the farm can give back to its community.

When asked what they wanted to people to know about the farm and what they do, Gabriella highlighted the difficulties of farming as a profession. “I think a lot of people don’t realize how much work goes into producing food, that it’s a tremendous amount of work, and it’s really hard. The conditions that a lot of farmworkers face are not so great–they’re really challenging. Like Edwin was saying, the boss is always looking over your shoulder, people don’t get paid a lot, and here they’re really hoping to work in a different way and to be their own bosses and to be able to create a different model of what’s possible and a different way to grow food.” As Edwin puts it “We’re taking a risk ourselves, so there’s high moments and low moments.”

The Common Share Food Co-op is proud to support our local cooperatives and organizations fighting for worker’s rights and access to healthy food. Please consider supporting this project by volunteering to farm with them Sundays (details are posted on their facebook page weekly), keeping an eye out for their products in stores as they continue to grow, and becoming part of the Workers Center. 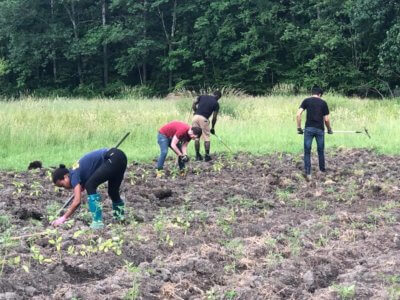 Check out their website here
Keep up to date with their facebook page
Learn how to submit content to this community blog
Interested in volunteering? Check out our upcoming volunteer opportunities!
View previous posts from this blog
Menu